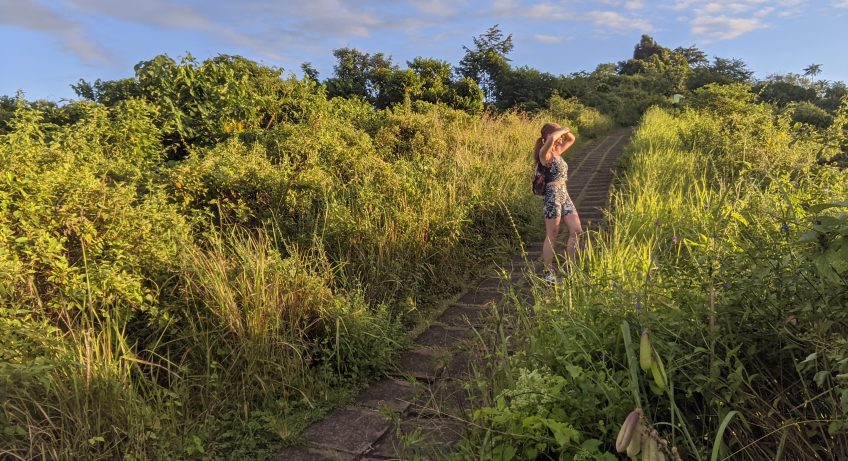 The past year has been one of reckoning and total transformation. One of the main reasons and results of this transformation for me is that I left my corporate job to prioritise my mental health and—as clichéd as it sounds—to follow my dreams.

Leaving was not without difficulty. I excelled at my job, moving up the ranks quickly, pulling in perks and pay that made for a comfortable life—on paper at least. More than that, my colleagues had much to do with making the UK feel like home to me. It was at this job that I met one of my best friends and joined the best cover band ever. Becoming reliant on this sense of accomplishment and community, I ignored the inner voice telling me that it was time to move on.

In response to my neglect, the inner voice grew louder, manifesting in different ways in an effort to demand my attention: a disorienting sense of imbalance as I walked down a long underground tunnel on my way to work, soreness in both of my legs as soon as I sat down at my desk and then depression so debilitating I couldn’t even bring myself to get out of bed, let alone work. Finally, I started to listen.

Toward the end of last year, I listened to a book called Homecoming, which included guided meditations focussed on inner child work. A simple statement in one of the meditations has stuck with me ever since. To paraphrase, it goes something like this: when we’re babies, we know exactly when to hold on and when to let go. A baby doesn’t have an existential crisis over whether to release their hold on breast or bottle; they’ve not yet been taught to distrust their inner knowing.

As I imagined my infant self responding with such ease to my needs and desires, something clicked.

By this point, I had returned to work and found myself slipping back into depression’s depths. I knew these two factors were not merely linked by correlation, but also by causation. I knew if I stayed, I would return to the disconnect that I felt at the start of the year. It was time to trust this inner knowing. It was time to let go.

For so long, leaving had felt impossible, unimaginable even. Rather than heeding the pokes and prods to pivot, I told myself that sticking it out was the “right” thing to do. For whom, I never explored. So, I held on, white-knuckled, until staying felt more impossible than leaving—until I had no choice but to let go.

When I did finally let go, I realised that the fears I had been harbouring were unfounded. I felt like I was able to breathe again. I felt ease embrace me after a too long era of too much effort. New opportunities began to arise as I continued tuning into that inner voice: See? it said. I told you.

Right now, I feel better than I have in a long time. That is to say I feel happy, connected, aligned, grounded yet dreaming big. I know that no longer being at a job I had long outgrown has a lot to do with my improved mental health and mindset. Still, rather than regretting not leaving sooner, I will continue the work of building trust in myself and listening to that inner voice, applying this lesson of holding on and letting go to moments yet to come when fear threatens to drive a wedge between inner knowing and outward action. I will work towards instilling the trust of holding on and letting go in line with my needs and wants and hopes and dreams.

Have you found balance between holding on and letting go? Which do you do more? Which do you fear more? When have you pushed past the fear? What was on the other side?

Let’s get connected and conversing: comment with your tips for building self-confidence and -trust in holding on and letting go.

With prompts, short reads and tips to inspire your own creative and wellbeing practices, these end-of-the-month emails offer a moment of pause to reflect and look ahead.